If you’re considering Panama residency, tourism, or if you’re just curious about Panama food culture in general, you’re in for a treat. Panama is known for its rich and varied gastronomy, which blends traditional indigenous and mestizo influences with flavors from all over the world. From seafood dishes cooked with fresh Caribbean spices to comforting stews made with local produce, there’s something for everyone when it comes to Panama food. In this blog post, we’ll take a closer look at some of the most popular dishes in Panama and give you an idea of what to expect when eating out or grocery shopping in this Central American country. 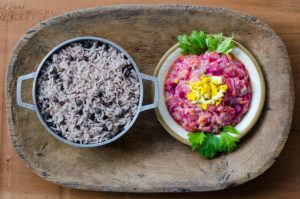 Both are popular recipes in Panama, also known as “Arroz con guandú” and “ensalada de fiesta”

Understanding the Origins of Panama Food Culture and Gastronomy

To understand Panama food culture properly, it’s important to understand the country’s history and sociological culture first. Panama is a melting pot of sorts, with a population that is made up of indigenous peoples, Afro-Panamanians, and people from all over the world. This diversity is reflected in Panama’s food culture, which has been influenced by Spanish, African, Chinese, and North American cuisine (among others). Panama’s gastronomy is also unique in that it uses fresh local ingredients to create dishes that are both healthy and delicious.

Some of the most popular Panama food staples include rice and beans (often served together), plantains (both cooked and green), yuca (a type of cassava root), seafood dishes like ceviche or sancocho de pescado (a fish soup), and meats like chicken or pork. Beef is less popular than in other parts of Latin America and North America, however stewed beef is common, as are burgers. A typical meal for a Panamanian will include a protein (meat or fish), a side of rice and beans, a salad, and either fried plantains or a green vegetable like yuca.

Panama food is often quite flavorful, thanks to the use of fresh chili peppers, cumin, oregano, and other spices. The most common type of chili pepper used in Panama cuisine is the aji chombo, which is also known as the “little hot pepper”. Though it is uncommon to eat very spicy food in Panama, there are common condiments to add spiciness to food should someone want it that way. Hot sauce using aji chombo peppers is the most common and can be found tableside in almost any Panamanian house or restaurant.

Anyone who is relocating to Panama or simply visiting as a tourist will immediately pick up on the similarities between a lot of Panamanian dishes and Chinese food. This is because, historically, Panama has had a large Chinese population that has exerted a significant influence on the country’s gastronomy. The most popular Panama dishes with Chinese origins include arroz chino (a fried rice dish), empanadas chinas (fried dumplings), and certain variations of tortillas de harina (flour pancakes).

Arroz chino is one of the most commonly eaten Panama foods and can be found in almost every small restaurant or home kitchen. The dish is made by stir-frying rice with vegetables like peas, carrots, and onions, as well as protein (usually chicken, pork, or shrimp). Arroz chino is often served with ketchup or soy sauce on the side. At a Panamanian “fonda”, or low-cost eater/cafeteria, you can usually see all of these Chinese dishes served in a Panamanian style with Panamanian spices added to make it a truly hybrid, yet authentic cuisine.

It’s no mystery that the past century of America’s role as both a military and civic partner (Panama Canal) in Panama has had a tremendous influence on the country overall. That influence can be seen in many aspects of life in Panama, and food is one of them. A big part of Panama food culture comes from American fast-food and low-cost food staples. Dishes like hamburgers, hot dogs, grilled cheese sandwiches, and even macaroni and cheese can be found all over Panama and are highly popular.

One of the most popular American foods in Panama is the “combo”, which is a dish that consists of a meat dish (usually chicken or steak), fries, and a soda. The combo can be found at almost any Panama restaurant that serves fast-food-type dishes. Other popular American foods in Panama are chicken wings and American-style fried chicken. Fried chicken breasts, thighs, and wings are very popular all over Panama, with buffalo-style wings growing tremendously in Panama’s food scene over the past 10-15 years as well.

Famous Restaurants in Panama You Can’t-Miss

When visiting Panama or relocating to Panama, you’ll want to check out some of its most popular, and most delicious restaurants upon your arrival. While there are many great restaurants all over the country, we’ll focus in this blog on some of the best in Panama City. The city has grown tremendously over the years, but some institutions of Panama food culture remain and are doing very well despite many tests of time. Many of these restaurants have multi-generational customers and have largely kept prices affordable in accordance to local market trends.

Panama’s oldest, and best-known restaurant is one called Cafe Coca-Cola. This small, humble eatery nearby Panama’s old city has been serving up some of Panama’s most traditional food dishes for over 100 years. If you want a taste of Panama’s gastronomic roots, this is the place to go. Cafe Coca-Cola is known for its huge portions of Panama comfort food like sancocho, arroz con Pollo, club sandwiches, burgers, tamales, empanadas, and more. The restaurant has an extensive menu with something for everyone, but it’s the simplicity of the Panama dishes that really makes this place special.

Another great option for restaurants in Panama City is El Trapiche. This restaurant is slightly more upscale than Cafe Coca Cola but still offers very reasonably-priced food and a festive atmosphere for guests. This restaurant is located in the expat-popular El Cangrejo district and is known for its Panama-style seafood dishes. The most popular dish at El Trapiche is the “Pescado Frito” which is fried whole fish served with a side of white rice, beans, and salad. This dish is typically Panama’s version of “fish and chips” and can be found all over the country but many believe it is done best at El Trapiche.

If you’re ready to dive in and try some of this Panama food for yourself, it’s time to start thinking about Panama relocation. Here at International Relocation Firm, we specialize in a variety of real estate services, relocation services, investment services, and relocation services in general. We can help you navigate any of the procedures involved in Panama visas and other pre-requisites to relocating to Panama. For more information, or to get started, please contact us here, and we will have an associate reach out to you as soon as possible for a thorough consultation.