Biodiversity in Panama: An ecological wonderland

Biodiversity in Panama is a huge draw for both tourism and research science and its recognition has been growing tremendously over the years. In fact, did you know that Panama is one of the most biodiverse countries on Earth? With a stunning array of tropical species, it rivals any nearby country in terms of biodiversity. The country is also home to some of the most pristine and well-protected ecosystems on the planet. This has made Panama a popular destination for ecotourism, as well as for scientists who are looking to study the incredible variety of flora and fauna in this corner of Central America. 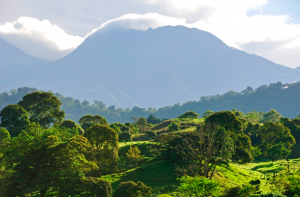 The term biodiversity refers to the variety of life in an area. Biodiversity is measured by looking at the number of different species in a given ecosystem, and how they interact with each other. Biodiversity can include plants, animals, fungi, bacteria, and even viruses. The higher the biodiversity in an area, the more resilient it will be to external pressures such as climate change, destruction of habitat, or introduction of invasive species. Biodiversity is also important for providing human populations with resources such as food, medicine, and clean water.

Some examples of important biodiversity in the tropics are the dense rainforests that cover much of Panama. These areas are home to an incredibly diverse range of plants, animals, fungi, and other organisms. In fact, some estimates suggest that the number of species in these areas is greater than any similarly sized area on Earth! This has led scientists to dub many tropical ecosystems “biodiversity hotspots”, which are areas with an extraordinary amount of diversity, many times in a small, concentrated area.

The Biodiversity in Panama

In terms of biodiversity, Panama has much to offer. The country spans a wide range of ecosystems from tropical rainforests to drier mountain ranges, with species of plants and animals that can be found nowhere else on Earth. In fact, Panama is home to over 9,000 species of vascular plants and more bird species than any other Central American country. The tropical rainforests in Panama are home to a spectacular array of animals, from the iconic Harpy Eagle and Scarlet Macaw to monkeys, jaguars, sloths, and tapirs. On top of these species, the country also contains a wide range of amphibians, reptiles, and invertebrates.

Throughout the country, there are major protection and preservation efforts going on to maintain Panama’s natural beauty. This includes protected areas such as the Panama Canal watershed, La Amistad International Park, Bocas del Toro Marine Reserve, and Chagres National Park. These protected areas provide habitat for endangered species and help to protect important biodiversity hotspots. In addition to preserving Panama’s natural heritage, these conservation efforts also draw in ecotourism dollars, as well as scientific grants from around the world. Biodiversity in Panama is an incredible asset for both tourism and research science alike, which is driving a lot of good money and attention to the isthmus these days.

Ecotourism in Panama has had steady growth for well over a decade now, and that growth shows no signs of slowing down any time soon when you look at the institutional investment and tourism investment in this space. Places like Bocas del Toro, the Baru Volcano, and Coiba Island are becoming increasingly popular with eco-tourists looking for new and exciting adventures. Bocas del Toro is a particularly interesting destination as it’s home to one of the only functioning coral reefs in Central America, making it an important spot to look at marine biodiversity.

Visitors who come to Panama for ecotourism look for sustainable options that emphasize nature without impacting the environment too much. This includes things like bird-watching tours, jungle hikes, and whale-watching trips, all of which provide visitors with amazing experiences while respecting the natural habitat of Panama’s wild inhabitants. Panama is an ecological wonderland that is home to a stunning array of natural wonders that draw in responsible tourists, as well as drive funds into preservation efforts. On top of tourism, biodiversity in Panam is also a huge reason for scientific investment and research development.

Research centers such as the Smithsonian Institute of Tropical Research are making use of Panama’s varied ecosystems to study global trends in climate change, ecology, and conservation. Biodiversity in Panama also provides opportunities for pharmaceuticals and other industries to research potential treatments from plants and animals that may not be found anywhere else on Earth. Other research institutions, like the Biodiversity Institute of Panama, are studying the impact that deforestation has on biodiversity and the implications this has for global climate.

If you are interested in sustainable tourism, ecotourism, scientific research, or biodiversity in Panama, we highly recommend you visit the country to check out these things for yourself. Whether staying for just a few days or relocating to Panama full-time, you’ll find yourself surrounded by the stunning beauty of Panama’s diverse ecosystems, with an abundance of flora and fauna species that rival any country in the world. Contact us here to find out more!