Panama: The International Transportation Hub of the Americas

Panama is often called the “crossroads of the world” because of its unique central location in the Americas. The country is a major connector between North America, South America, and the Caribbean, making it an important hub for international trade and transportation. Tocumen Airport is one of the busiest airports in Latin America, with dozens of international flights arriving daily. Copa Airlines has expanded its route network over the years to include more destinations in Central and South America. And thanks to the Panama Canal, maritime travel and trade are also a big part of Panama’s economy. 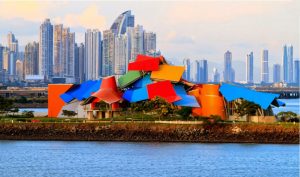 One of the big reasons why Panama has framed itself as an international transportation hub is its location. Panama is located on an isthmus that connects North and South America and straddles both the Caribbean Sea and the Pacific Ocean. This makes Panama a key transit point for trade between the two continents. The Panama Canal is also a major contributor to Panama’s economy, as it facilitates over 1,000 ships each month in passage, many of which are passenger vessels.

Coming from South America’s largest business hubs into Panama takes about as much time as coming from North America’s largest business hubs. This may seem inconsequential, but for investing in Panama, relocating to Panama, or even visiting Panama as a tourist, this is a huge incentive. Panama is also in the same time zone as either New York or Chicago, depending on the time of year, and this makes jet lag from other parts of the Americas almost non-existent.

Copa Airlines, Panama’s flag carrier, is headquartered at Tocumen Airport. The airline has an extensive route network that includes over 60 destinations in 30 countries. Copa Airlines has been expanding its operations in recent years, and now offers direct flights from Panama City to major cities such as Los Angeles, Miami, New York, Orlando, and San Francisco. Not only does Copa have massive international volume into Panama, but so do other large carriers like Air France, American Airlines, KLM, United, and more.

The Panama Canal: A Key contributor to Panama’s Economy

The Panama Canal is one of the most important waterways in the world. The canal stretches for nearly 80 kilometers (50 miles) and connects the Pacific Ocean with the Atlantic Ocean. It is used by over 14,000 vessels each year, carrying over 200 million tons of cargo. The Panama Canal is a key contributor to Panama’s economy, as it generates over $800 million in revenue each year.

The Panama Canal is also a major tourist attraction, with over one million visitors taking a Panama Canal cruise each year. Cruise ships are able to transit the canal from east to west, or west to east. The Panama Canal is one of the most popular tourist attractions in Panama and is a big part of the country’s tourism industry. The trade and tourism associated with the Canal increases the ancillary demand for Panama hotels, Panama restaurants, and Panama transportation services.

Panama is quickly establishing itself as the international transportation hub of the Americas. With its strategic location, world-class infrastructure, and expanding airline and maritime routes, Panama is well on its way to becoming a leading player in global trade and travel. The Panama Canal helps this progress by providing a key link between the Pacific and Atlantic oceans, and Panama’s Tocumen Airport is facilitating more and more international flights each year. As Panama continues to invest in its infrastructure and expand its transportation capabilities, it is poised to become an even more important hub for trade and travel in the years to come.

As Panama has grown into an international transportation hub, it has also become more appealing as a location for international business. People looking at investing in Panama will find that the country has a lot to offer. Panama is a great place to invest in real estate, as the country has many different types of commercial and residential projects and legacy developments to choose from. It is also a great place to invest in as a corporation, or corporate partner.
Panama’s tax structure is favorable to international investment, and as a transportation hub and logistics hub, doing international business in Panama is easier than ever. Other big areas of opportunity for investing in Panama are in tourism, agriculture, and Panama’s Free Trade Zones. By investing in these areas, you are eligible for an easier path to citizenship, as well as an easier path to open a bank account or gain permanent non-citizen residency there.
Panama is an up-and-coming country with a lot to offer investors. With its strategic location, world-class infrastructure, and expanding airline and maritime routes, Panama is well on its way to becoming a leading player in global trade and travel. If you are looking for a place to invest in in the near future, Panama should definitely be at the top of your list.

To learn more about investing in Panama, doing business in Panama, retiring in Panama, or simply relocating to Panama with your family, we can help you get started. At International Relocation Firm, we are Panama experts and can help you with all aspects of your Panama move. We offer Panama real estate services, Panama corporate formation services, Panama retirement planning services, and more. We can also help you with all the necessary paperwork and logistics associated with your Panama move.

If you are interested in learning more about Panama or relocating to Panama, please contact us today. We would be happy to answer any of your questions and help you get started on your Panama journey.