Political parties in Panama are arranged in a multi-party system, with a large number of similarly sized parties forming factions and coalitions. The sheer number of political parties may seem chaotic to foreigners, but all parties form coalitions of convenience in effort to leverage and obtain political power. The nature of coalitions within any democratic process ensures that political parties in Panama run a relatively stable form of government, ensuring a healthy blend of policies in the small republic. With 11 parties in the Panamanian parliament, this stabilizing influence has been invaluable and helps to create the balanced, business-friendly political eco-system Panama is renowned for. 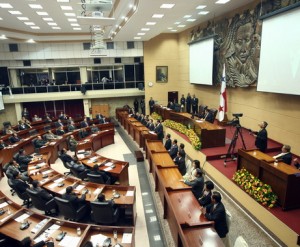 Currently there are two major coalitions of political parties in Panama – the Alliance for Change, which contains Democratic Change, Panamenista Party, Patriotic Union, Nationalist Republican Liberal Movement; and the opposition coalition, composed of center-left and left leaning groups called One Country For All (OCFL), which includes the PRD, The People’s Party and the Liberal Party

With 5 of the 11 parties in Panama carving up the majority of the vote, we’ll take a close look at these main parties and break down what their main stances and tactics are.

Established by Omar Torrijos in 1979, this party currently holds 17 of the 71 seats in National Assembly. With a populist, center-left affiliation, the party has recently begun the process of updating its internal structure, moving to a more transparent structure in a bid to improve its perception with Panamanian youth. Their policies include a focus on agriculture, education, and re-organizing the civil service and welfare state. Their last turn in power came to an unpopular end, with the party not doing enough to placate business and losing public support with a series of unloved political manoeuvres. Their diminishing reputation was further sullied by serious accusations of cronyism and political favors. The party was last elected to power in 2004, with Martin Torrijos (son of Omar) winning 37 percent of the popular vote and gaining 41 out of the then 78 seats in the National Assembly.

The oldest party still operating in Panamanian politics, the Panameñista Party, focuses on a blend of liberal-progressive and conservative values taking a business-friendly stance on politics. They have a reputation for choosing divisive leaders, such as Mireya Moscoso, who have helped stunt the party’s growth. The party has talked about a constitutional overhaul if they come to power, which may affect their political support amongst the business community in Panama. Political earthquakes aren’t popular with businessmen, although the party has yet to commit to a definite policy on the matter. The party, which currently holds 11 seats in the National Assembly, is led by Juan Carlos Varela who has brought much needed stability to the party since Moscoso’s departure. Varela opted to support the present incumbent President, Ricardo Martinelli, in the 2009 elections and led to Varela achieving the position of Vice President in the coalition. However, Varela’s relationship with Martinelli has been notoriously fractious, with the alliance collapsing in late 2011.

Recently founded in the late 1990’s, Cambio Democratico is the party of the current president of Panama, Ricardo Martinelli. The party surprised many analysts with their election victory in 2009, taking 23.4% of the popular vote, but maintaining their coalition for long enough to squeeze into power. Their stance, while mostly business-friendly and conservative, their policies also include a number of additions to the welfare state and education systems. Their recent political behaviour demonstrates a distaste for unions, indigenous rights, and those opposed to a recent fiscal responsibility law, as well as earning them a stained reputation with the country’s Chamber of Commerce. The party has advanced the cause of mining, dam building, infrastructure upgrades (roads, metro, busses, canal expansion, costal parks) and the free trade zone – although their business-friendly reputation has suffered with accumulation to the public debt and unpopular tax laws for businesses. Their coalition holds 37 seats in the National Assembly.

One of the smallest major parties, MOLIRENA are known as the “patchwork quilt” by Panamanian commentators. They derive their nickname from their free-market and commercial friendly policies and internal allied structure, as well as their repeated alliances with larger political parties. In the last three elections they have sided with ADP coalitions leaning to the right of center. They currently hold just 3 deputy seats in the National Assembly, although their position in the Alliance for Change coalition ensures they have a disproportionate reach for their size.
People’s Party

With just 1 deputy in the National Assembly of Panama, the socially-conservative People’s Party trace their beginnings back to a small political group known as the Christian Democratic Party. Reaching their political peak in the early 90s, the party was unable to maintain its place at the top of all the political parties in Panama and have seen their support diminish. With social policies that reflect their origins, the party have generally supported the policies of the PRD. They have switched their support to a number of different coalitions in the last three elections, having diminished from their 1999 peak of 5 deputy positions.

Overall, the incumbent Cambio Democratico’s position at the peak of Panamanian politics looks precarious, with polls pointing to a potential loss of power. President Martinelli is constitutionally forbidden from running again and Arias will be running as the CD candidate in 2014. Whether the CD can maintain its primacy under the combined onslaught of the main parties is debateable, however Arias is currently ahead in local pools with both the PRD (under Juan Carlos Navarro) and PP (headed by current Vice President Varela) trailing. Nothing is certain in Panamanian politics but the election of 2014 may throw up further surprises, so keep your attention on the front pages from now until May.