What does it mean to authenticate documents by Apostille?

You have likely heard the term before, especially if you’ve processed legal documents, but do you know what it means? By definition, an apostille is a certificate that can legally authenticate the origin of a public document. Some common examples of this are a birth certificate, death certificate, police report, court judgment, or what’s known as an extract of a public register. To authenticate a document by apostille recognized internationally, it needs to be done between countries where both are parties to the 1961 Hague Convention, also known as the “Apostille Convention.”

Overview on How to Apostille Documents

Authenticating a document by apostille has many direct purposes and uses for those who are looking to immigrate to Panama, buy property in Panama, or do business in Panama. Its main purpose is meant to certify that the signature and seal of a public document has been made by a competent authority. This process, like authentication (legalization) only certifies the signature or stamp showing the document was issued by a public official in the exercise of their functions, but does not certify the validity of the content. This allows a national document to be recognized in a foreign country.

Where to Go to Get your Documents Authenticated by Apostille

Traditionally, the Panamanian consulate in your home country (or any Apostille Convention country) has been a good resource for getting non-Panamanian issued documents authenticated for use in the Republic of Panama. However, Panamanian consulates are not always available and authenticating documents through them can sometimes by inconvenient, as well as more costly than an apostille.

Thankfully, most countries are parties to the 1961 Apostille Convention, and all that are part of this convention will produce valid Apostilled documents for Panama. There are currently 92 members. These member countries are as follows: 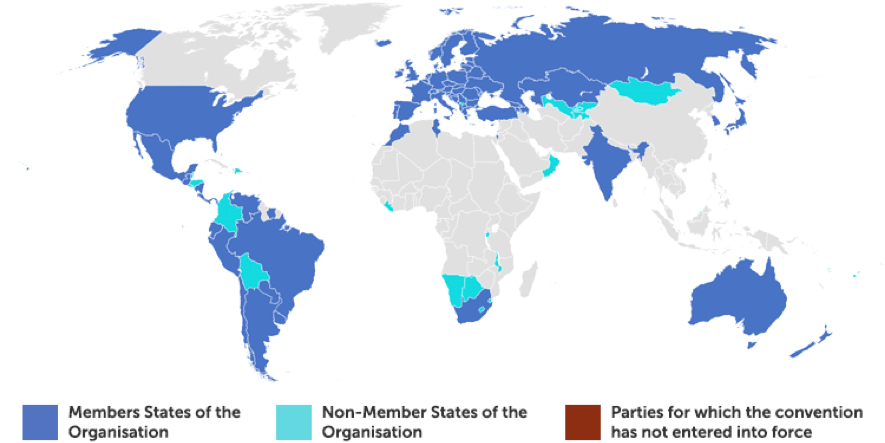 For more information on each of these member countries, and official requirements as published by the convention, click here.

Who, specifically, can issue an Apostille authentication?

Apostilles may only be issued by what is known as a “Competent Authority.” This is designated by the state on whose territory the public document has been executed.

The United States of America has three tiers of authorities competent to issue the apostille certificate. The U.S. Department of State Authentication Office affixes apostilles to documents issued by Federal agencies of the United States. The U.S. Department of State, Bureau of Consular Affairs, Passport Services, Vital Records Section affixes apostilles to Consular Reports of Birth, Death and Marriage of U.S. Citizens abroad and certificates of birth and death originally issued by the Panama Canal Zone Government between 1904 and 1979.

The Clerks and Deputy Clerks of the Federal Courts of the United States are also authorized to issue apostilles on documents issued by those courts. As an alternative, the U.S. Department of Justice may authenticate the seal of the federal court and the U.S. Department of State Authentications Office will then place an apostille over that seal. Public documents issued by U.S. states, the District of Columbia and other U.S. jurisdictions may be legalized with an apostille by designated authorities in each jurisdiction, generally the state Secretary of State’s office.

For more resources online of services within the United States that will process your apostille document, check out (click):

Unfortunately, Canada did not sign the 1961 Apostille Convention so technically you cannot get an official document apostilled in Canada. You can, however, get an equivalent. Due to the demand for apostilling, and the lack of availability without being a part of the Hague Convention, Canada has set up a process called the “Authentication and Legalization” of documents. This is equitable to a document apostille, and applies as valid to all of the countries on the 1961 Hague list.

As a Canadian, you can get your documents apostilled at a Panamanian Embassy or Consulate, however for efficiency’s sake, we recommend checking out the following services:

For any questions as to what you’ll need to get apostilled for your immigration to Panama, opening of a Panama corporation, opening a Panama bank account, or starting a business in Panama, please reach out to International Relocation Firm for a consultancy!

Have a question? We're here to help. Give us a call or send us a message and get a free Panama legal consult.

Browse 100s of articles to & learn how to make moving, living, investing and doing business in Panama easy.

Browse eBooks and guides on Panama immigration, relocation, business in Panama and more.